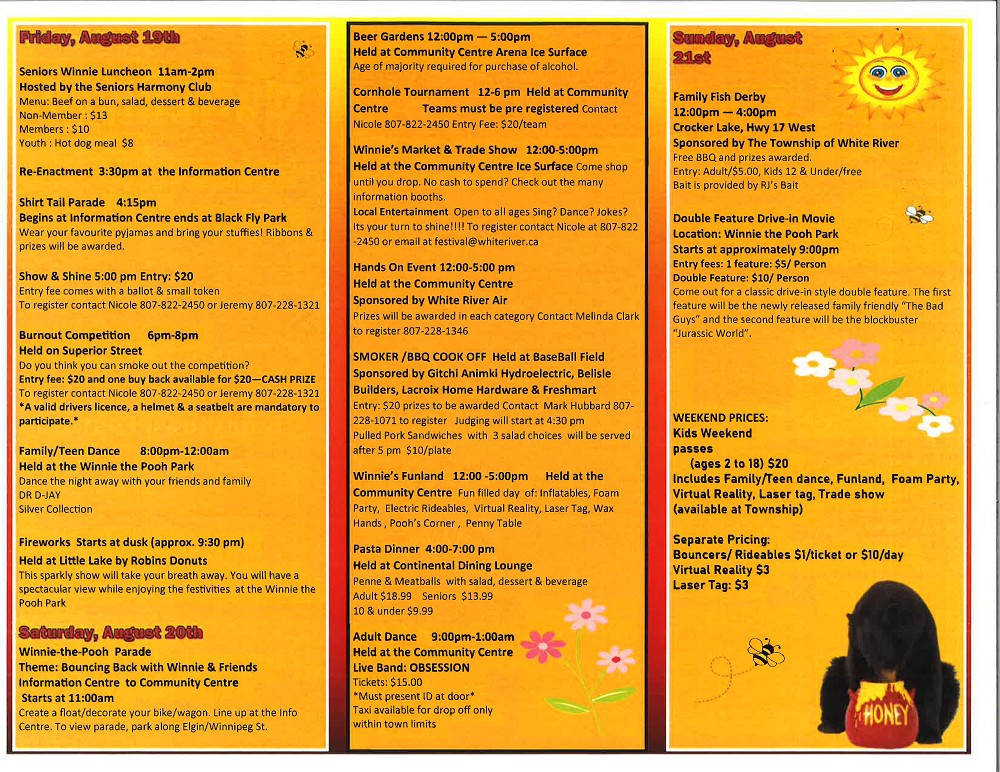 Join our Facebook group https://www.facebook.com/groups/winnieshometownfestival/ so that you don't miss out on any of the fun!

Winnie’s Hometown Festival celebrates White River’s inclusion in creating one of the most storied fictional characters of all time, Winnie the Pooh.

Officially, White River has been recognized as the birthplace of Winnie the Pooh and thus, our community created a festival to honour our unique connection with one of the most popular fictional characters of all-time.

Every third weekend in August since 1988, White River celebrates with our festival colloquially known as “Poohfest”. The festival is a three-day event that includes dances, parades, historical re-enactments, live entertainment, community meals, a tradeshow, among other locally-hosted events. Winnie’s Hometown Festival combines White River’s small-town charm wrapped up in a distinct yearly theme, all within the historical context of Winnie’s journey to prominence. You won’t regret spending a weekend learning about how White River played a role in Winnie’s upbringing.

The story goes: during the first World War, White River was a routine stop for the railway supply line that brought soldiers, animals, and much-needed supplies across Canada. In August 1914, a young military lieutenant who was training to be a veterinarian named Harry Colebourn stepped off the train in White River for a rest when he spotted a trapper with a leashed black bear cub on the station’s platform. The bear’s mother had been killed just outside of town and thus made an orphan, and unfortunately, the trapper could not keep her himself. Harry Colebourn could not let the bear live with such an unknown fate so he purchased the bear cub from the trapper for $20. Harry named her Winnipeg, after his hometown, and took her on the train which was heading to England for training before heading to the front lines in France.

Winnie had become a mascot of sorts for Colebourn’s regiment while training in England, living and sometimes even sleeping beneath Harry’s cot. Unfortunately, she could not be brought to France on account of the conflict so she would have to be rehomed. Subsequently, the bear was brought to live in the London Zoo where the author A.A. Milne and his son Christopher met Winnie for themselves. Christopher quickly developed a special relationship with the bear, so special in fact that one year Christopher had his birthday party in the bear enclosure. Inspired by his son’s relationship with the little Canadian black bear, Milne authored stories about Christopher and Winnie’s adventures in the magical hundred-acre wood. These stories have entertained children and adults alike for decades and have become a special cultural point for many people. White River is honoured to play a part in helping to create memories for readers around the world.